The new man cave, the in home tavern or pub has been the latest trend in rooms within the home.  Different from the typical bar area, this room is designated to games as well as alcohol.  A rustic feeling, similar to the old styled gentleman’s cigar clubs, the tavern at home is a place where entertaining leads the game.

Pubs, short for “public house” can be dated back to the Roman Tavern.

Traditionally the taverns or public houses you may visit have frosted glass or colored glass.  This is to obscure the customers from the street view.  Present décor parallels when designing your own “private” house tavern.  Stained glass, multiple mirrors, and masculine wood will attract your vision back to the bar.  The right types of barstools are also important, as comfort and style assists in the length of time that would be spent.

Recently more people are turning their living rooms and or dining rooms into this “social” area.

The first playing cards were to have been during the ninth century in China during the Tang dynasty.  The first card game to be on history was called the “leaf game”.  It wasn’t until circa 1369-1644 that faces appeared on the cards.

The deck we are all familiar with “French-suited” deck with English inspired styling contains fifty-two cards which combines the four French suits: spades, hearts, diamonds, and clubs; as well as the rankings from King down to the two (deuce) or ace.

In the last twenty-five years of the 14th Century, the “playing cards” made their debut.  Saracen or Moorish game, also called Naib dates the earliest reference spoken of. 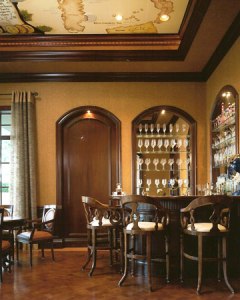 Normally, card games are played where all those participating sit forming a circle and/or a space that can house the cards.  Depending on the part of the world you are in actually plays a part in the direction of play.  For example: Most of Asia and South America play cards in a “counter-clockwise” manner, whereas, North America and Australia follow a “clockwise” direction.

Online card games have become very popular in this day in age, resulting in some in home pubs having electronic/digital online gaming devices.  However, most would agree, there’s nothing like poker night with friends and winning the pot.

Next time it’s your turn to host “game night”, you will be the “Nut Player” with style and design.